HECM endorsements dropped -9.9% to 2,874 loans in September, narrowly missing out on a new monthly low from the product changes one year earlier.

A full 7 of the top 10 lenders declined in September with just 3 showing gains:

Click the image below to access the full HECM Originators report including the most comprehensive originator rankings available on page 4. 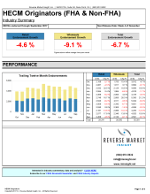