The 10/2/2017 FHA HECM product changes brought a surge of case numbers in September and now have brought a brilliant spike of endorsements to start 2018. January endorsements rose 32.5% to 6,313 loans, the highest monthly volume since March 2011!

We’ll see next month if that’s the peak endorsement month for this latest product change, but we already know subsequent volume will be greatly reduced given the much lower application and case numbers issued figures after September.

Meantime, let’s see how regions and lenders fared in this tidal rush of volume: 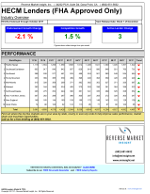