February is in the books, time to break out the spreadsheets and see what stories the numbers tell us. In a continuation of recent trends, competition continues to plateau, still hovering around 1,200 lenders per month as it has for 12 months now. That still leaves an increase over last year of 9% (Feb08 to Feb09), but down slightly from last month. The chart below says it all: 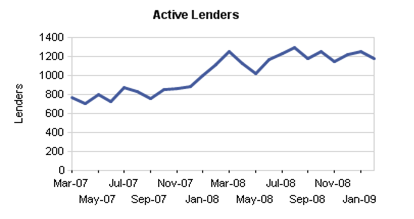 Total endorsements decreased from both last month (8%) and last year (17%). A bit of a surprise to see volume trend down in February given the increased loan limits took effect in November and resulting refinances should still be bumping up endorsements volumes. Particularly so since last February saw a nice increase in volume from January, although tough to read too much there given variance in endorsement timing. A single month of volume from the loan limit increases would be a pretty negative story for most in the industry, so we’ll be watching closely for further signals in next month’s data.

There continues to be a two-sided story of challengers vs. incumbents in the top 10 rankings. Half of the top 10 lenders have experienced volume declines over the prior year, including Wells Fargo (-14.7%) and Financial Freedom (-22.7%). Conversely, the 5 gainers have all increased their volume over 25%. 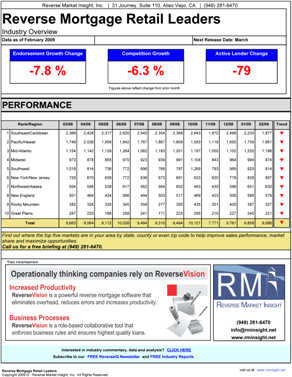